The October 14 2022 Solar Summit was a resounding success with a good attendance of very engaged participants. In what Governor Inslee called a "solarchat" format, he talked with Solar Washington President Jack Newman.  Here's a summary of Governor Jay Inslee's opening comments.

“We’re growing by leaps and bounds,” in Washington State, Governor Jay Inslee said as he opened the 2022 Solar Summit organized by Solar Washington. Even so, he contrasted Washington State with Berlin, where you see solar panels on almost every rooftop when you fly in.

“We have the same capacity as Berlin to be remarkable,” the Governor said. While solar is not as common in Washington, he said “I’m confident incentive programs are going to be effective.” 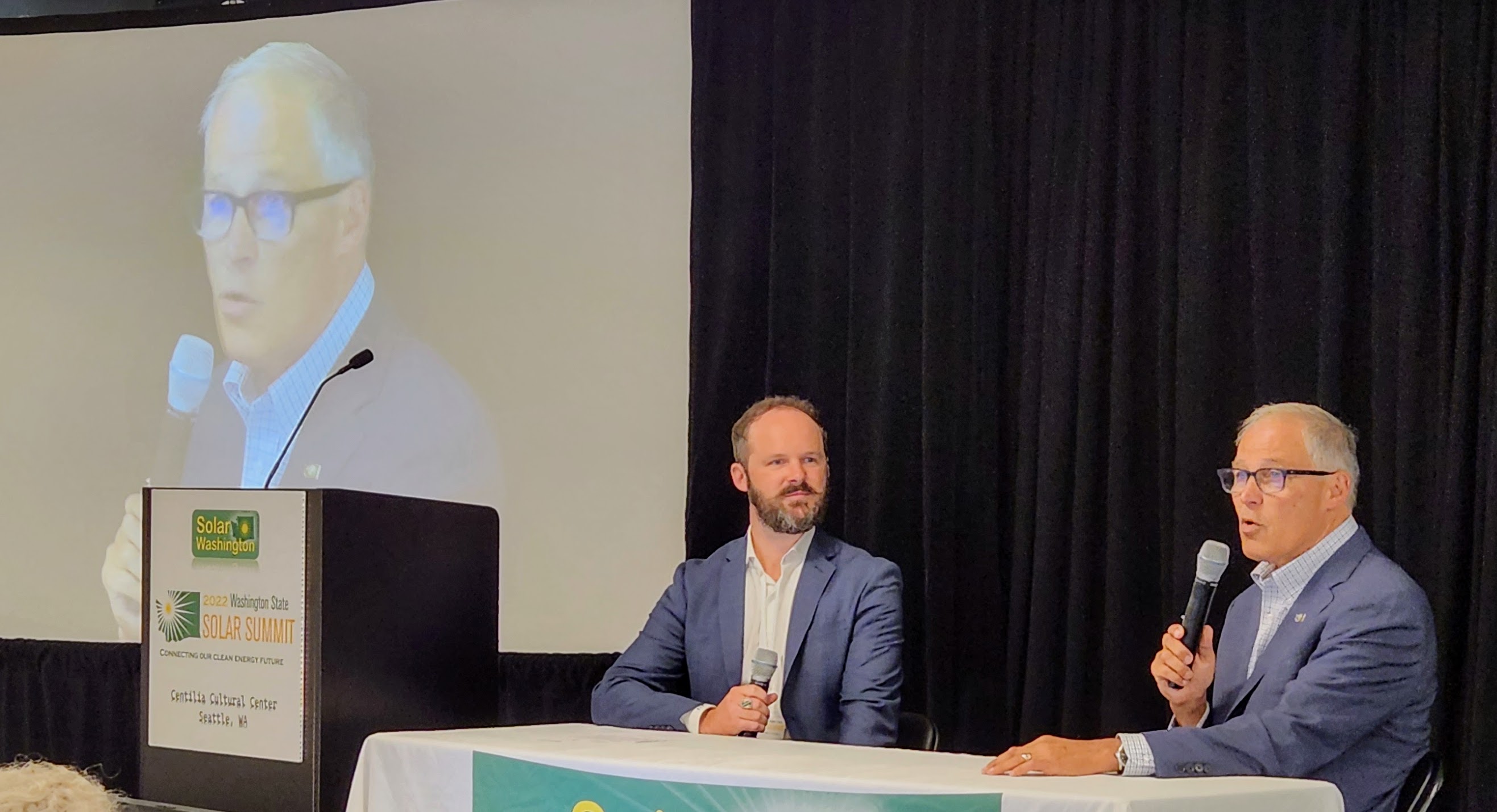 Initiatives to support those programs build upon what the state has learned from previous programs, he explained. “The first lesson is that they work and get people access to what they want. It works for residential customers and installers. They are effective and make sense.” Solar continues to reduce in cost and, while that curve may slow, Governor Inslee sees solar power as an industry that continues to be more attractive because of continued technological progress. “Our programs in our state have been embedded.”

In fact, he added, Washington State has proposals for solar and wind power that will produce several times more than the Snake River dams produce and they are in the pipeline today, even before incentives kick in. “The sky’s the limit when it comes to solar.”

On a personal basis, he said he finally put solar panels the roof of his house and “seeing zero electrical bills is exciting.” He also uses solar charging for his Chevy Bolt and then can drive all the day to Hurricane Ridge. “It’s elegant, beautiful.”

However, there are still challenges. One, Inslee said, is for small communities to get access to solar to charge electric vehicles and then to have charging station at apartments, to make it more universally available. “Credits in small community solar, where you can plug in at your apartment, are an elegant solution we need to build on.”

According to the Governor, Washington State has assets to support the industry with $6 billion available for clean energy. ”The state also has equitable distribution. We embraced environmental justice, and, at the same time, we’re developing clean energy. We have paid attention to justice and equality themes. It’s time we pay attention to job creation and photons.”

At a national level, Inslee observed, Americans understand that this is a really great deal. “We’ve had a quantum leap in the political situation. You have to get out of the way of solar energy. That’s why this revolution can take off. We are in a steady state, helping capital get into this industry.”

Looking ahead, Inslee said he sees new technologies all the time. One is to treat light before it gets to the cell, which enables changing the frequency, which can in turn change the efficiency of the cell. “Blue Dot kind of does that, increasing efficiencies.” Another is agrovoltaic (the joint development of the same land area for solar photovoltaic and agriculture), where solar panels are planned over irrigation canals and targets building solar cells on top of 12 square miles of unused agricultural fields.

Governor Inslee also noted that having storage capability is very important. With technological improvements in cell and installation technology, he sees storage technology as incredibly encouraging. Two silicone anode capacity companies, for example - Group 14 and Silica - are approaching a level to start manufacturing. “Cell technology is improving, right here in Washington State,” he said. “It’s an exciting time to be where the industry takes off,” Inslee observed.