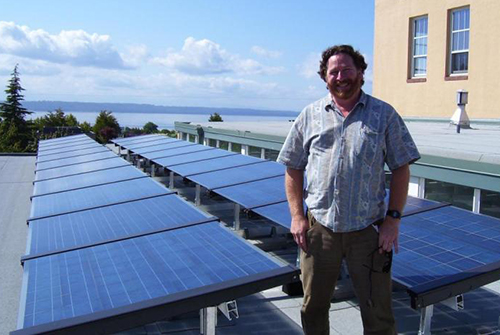 Community Solar legislation, passed in 2009, made it possible for renters, condo owners, forest dwellers and thousandaires to share in the triple bottom line of solar energy use. We can: reduce our carbon footprint (good for our planet), provide discounted power to the cities and schools (good for our community), and receive federal, state and utility incentives (good for our wallet). 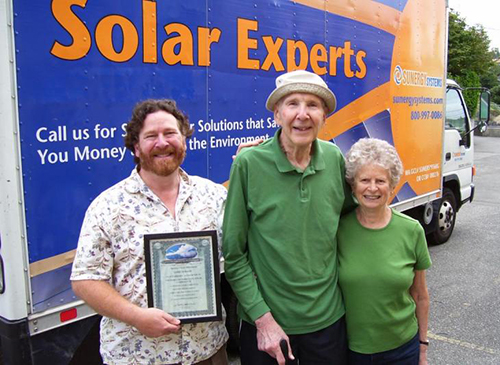 In spring of 2010, Sustainable Edmonds began investigating the possibility of installing community-owned solar arrays in their town. In particular, Chris Herman, owner of Winter Sun Design and a longtime solar activist, led the determined charge that made this project happen. Along with Mark Mays, an engineer at Outback Power Systems, Chris worked with City of Edmonds to identify appropriate sites for rooftop solar and received preliminary approval from Edmonds City Council to lease roof space. The site chosen was the Frances Anderson Center, a longtime community institution hosting the arts, recreation, and special events for the surrounding area which would provide great visibility to the community solar array.

Sustainable Edmonds wanted this project to be open to EVERYONE in the community. After consulting with Tangerine Power, a Seattle solar developer, they settled on a Cooperative form of shared ownership for the solar array they were going to construct. The Cooperative allows people of modest means to band together in unlimited numbers to fund solar power in their community. Edmonds Community Solar Cooperative was established in December 2010 for this purpose.

As we developed the project, we heard a lot of fears and concerns that the proposed solar array didn’t make sense for the City of Edmonds. Here are some of the ways we addressed those concerns and completed the project.

They told us “Solar is best delivered by big development companies”. To meet the challenge of building a municipal-scale solar array, we built an all-star team of local small businesses: 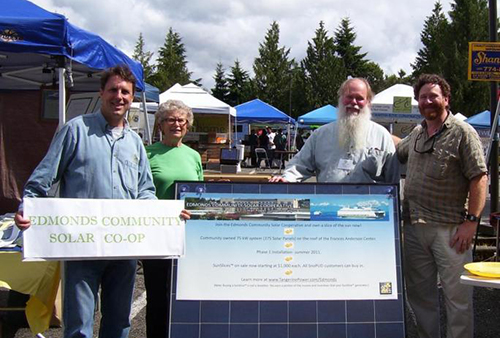 They told us “Solar is too expensive”. While solar is still often seen as an upscale purchase, we pooled our money in affordable $1,000 chunks called SunSlicestm to reduce the cost of going solar for any one person.  We found support for the array within our own community:  PCC Natural Markets, Edmonds Unitarian Universalist Church, and 36 individuals each bought one or more SunSlicestm to fund Phase I of this project to completion. Each of these members will share in energy payments and incentive payments from the state and federal government.

They told us “Solar is a bad deal for local government.” Actually, the Cooperative’s agreement with the  City of Edmonds will save them money on all solar-generated energy they use from the day the system is flipped on.

They told us “Solar will void our roof warrantee.”   We worked with Lloyd Lynch Construction and Soprema, the roofing material manufacturer, to put down protective pads under the solar array. We also built the first ballasted solar system in Edmonds to eliminate the need for roof penetrations.

They told us “Solar is incompatible with historic property.” We earned the trust of the Edmonds Historic Preservation board, who agreed with our argument that part of historical preservation is keeping a building functional and relevant into the new century.

The phase one solar array began making clean power for the City of Edmonds in September. There is plenty more room on the roof to install solar now that the basic groundwork is done. Edmonds Community Solar Cooperative will open phase 2 of the Frances Anderson Center project to new members throughout Snohomish County in late October 2011. Breaking news on the project is always available at www.tangerinepower.com/edmonds.