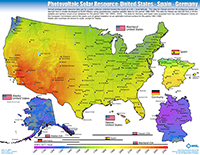 Washington State has 70% of the sun that Los Angeles receives. The Pacific NW gets more solar energy that of Germany, the leading global user of solar! We have some of the best incentives in the country, and solar panels are actually more efficient in cooler climates. Thousands of homes and business have solar installed, saving them money.

To learn about the solar potential of your rooftop, use the PV Watts website. Plug in your address, map out a solar system on your roof that faces closest to south and find an estimate for what your roof can produce.

Western Washington is famous for it’s long, rainy winters; but its position north of the 45th parallel makes it’s summer-hours the main attraction for a solar investment. Summers in the Pacific Northwest are generally sunny and clear, and daylight hours can stretch from nearly 5 AM to 10 PM in much of the state. These long, clear and (mostly) cool days produce large amounts of electricity. This electricity feeds back into the power grid, allowing energy companies to reduce the amount of power they are producing at the time.

At first glance, these long, summer days wouldn’t appear to help out much during cloudy, winter months. However, there is a clever legal policy in Washington called “Net Metering” that changes the game. During the summer, when your home or business produces more solar power than it is consuming, the excess electricity is pushed out into the grid and is used by the neighboring properties in your area. As the electricity does this, it passes through your electric meter, essentially causing it to run backwards.

While electrical production in the cloudy winter months is not nearly what it is in the summer, solar panels do produce power through the clouds. With careful attention to energy efficiency in the home, it is even possible to realize a net gain on occasion; especially if your home remains empty for much of the day.

On average, of course, you will draw more power than you use during cloudy, Western Washington winters; but even brief periods of light clouds or patchy sun can make a significant difference. In the end, it is the the total power your system produces for the year that really matters most from an investment standpoint.