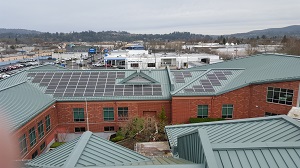 The following is a list in alphabetical order of common terms surrounding solar energy and its related uses. We will update this list as we run across additional terminology.

New for kids! Click this link to be taken to our solar glossary for kids sheet and a short video introduction to solar at the bottom of this page.

AC (Alternating Current) - This is the type of electricity used in homes and businesses and delivered to them from their electric utility. In the United States, the standard is 60 cycles per second. Electricity transmission networks use AC because voltage can be controlled with relative ease.

AMP (Ampere) - A unit of electrical current or rate of flow of electrons. One volt across one ohm of resistance causes a current flow of one ampere. An ampere-hour is a measure of the flow of current (in amperes) over one hour; used to measure battery capacity.

Azimuth - The angle between true south and the point on the horizon directly below the sun. The direction solar panels face affects how much electricity they produce. Knowing the azimuth is key to determining the anticipated electrical output. With due south at 180 degrees, west is 270 and east is 90.

DC (Direct Current) - Solar panels make DC electricity which must be converted to AC for use in a home or business.

Demand Response - The process of using voluntary load reductions during peak hours. In other words, customers reduce their use of electricity in response to pricing signals, automated technologies or other communication.

Distributed Energy Resources (DER or DE) - A variety of small, modular electricity generating technologies that generate power to be used locally, at the location where it is generated. Customer-Generated electricity is a Distributed Energy Resource because it does not come from a centralized power plant but instead is generated and used onsite or in the neighborhood.

Interconnection - Utility customers must meet standards and be approved before their customer-generated electricity may be interconnected with the grid. During the process of installing solar, the installer or the customer must complete the Interconnection Agreement with their utility. NW Solar Communities has worked to simplify and standardize this process across utilities to help make the interconnection process simple and fast.

Kilowatt (kW) - A standard unit of electrical power equal to 1000 watts. KW is also a term used to refer to sizes of solar systems.

Kilowatt-hour (kWh) - 1,000 watts acting over a period of 1 hour. Most electrical meters measure kWh for billing purposes. For planning purposes, residential and business size solar systems are designed to generate a certain number of kWh per year. That way, a customer can know how much their electric bill will go down, over the course of one year, by adding a solar system.

Levelized Cost of Energy (LCOE) - This online calculator provides a simple calculator for both utility-scale and distributed generation (DG) renewable energy technologies that compares the combination of capital costs, operations and maintenance (O&M), performance, and fuel costs Note that this does not include financing issues, discount issues, future replacement, or degradation costs. Each of these would need to be included for a thorough analysis.

Net Metering - Standard metering of electricity use with a bi-directional meter that accounts for customer generation and provides billing credits for excess or "net" production during a billing period. Here in Washington, the Net Metering year ends on April 30 when all bill credits zero out and a new year begins.

Off Grid Solar - An array of solar panels producing electricity that is stored in batteries for a home or location that is not connected to a utility power distribution grid.

Passive Solar - A building that has been specifically designed and situated to capture the heat from the sun shining through windows.

Pitch or Tilt - An existing building’s roof’s pitch or tilt is measured in degrees or as a fraction. It is the rise in inches over a 12 inch (one foot) distance. For example a 4/12 pitch rises 4 inches over a distance of 12 inches. Tilt is the angle of inclination of a module measured from the horizontal. Tilt or pitch impacts the solar production of a solar panel. When planning to build a new structure, the ideal pitch or tilt for depends on the latitude of the location; and thus the best year-round angle to the sun. Solar panels produce the most power when the surface of the solar panel is exactly perpendicular to the direction of sunlight.

PV (Photovoltaic) - Direct conversion of light into electricity. A Solar PV Module (aka panel). Solar photovoltaic devices are made of various semiconductor materials including silicon, cadmium sulfide, cadmium telluride, and gallium arsenide, and in single crystalline, multicrystalline, or amorphous forms.

PV Effect - The phenomenon that occurs when photons, the "particles" in a beam of light, knock electrons loose from the atoms they strike. When this property of light is combined with the properties of semiconductors, electrons flow in one direction across a junction, setting up a voltage. With the addition of circuitry, current will flow and electric power will be available.

Production Metering - Additional metering used to measure the electricity produced by a customer generation system which is required to apply for production incentives.

Silicon (Si) - A semi-metallic chemical element that makes an excellent semiconductor material for photovoltaic devices. It crystallizes in face-centered cubic lattice like a diamond. It's commonly found in sand and quartz (as the oxide). Solar panels are typically made of monocrystalline or polycrystalline silicon cells.

Solar Energy - Electromagnetic energy transmitted from the sun (solar radiation). The amount that reaches the earth is equal to one billionth of total solar energy generated, or the equivalent of about 420 trillion kilowatt-hours.

Solar Panel Efficiency - the percent of electrical energy that a solar panel produces (under optimal conditions) as compared to the total amount of energy from the sun falling on the solar panel. Typical solar panel efficiency is currently between 12% and 18%, although this value is improving over time.

Solar Tracker – Usually a mechanical device that orients solar panels toward the sun and moves throughout the day and year. Trackers can adjust the tilt of the panels seasonally and/or move from facing east to west throughout the day. Typically trackers are only used in very large solar systems.

Watts or Wattage (W) - When describing or comparing solar panels, wattage is a description of the power production ability of each solar panel. In the factory, panels are tested and then labeled for the wattage.

Introduction to solar and glossary for kids!

We've provided a short and fun glossary of solar terms for kids. Click here to view or download.  Also, check out our short introduction to solar video on our YouTube channel aimed at giving kids a glimpse at solar energy, how it works and where you can find it.

Please support our efforts to provide solar educational resources to all Washingtonians. Become a member or make a donation today. Thanks for your support!