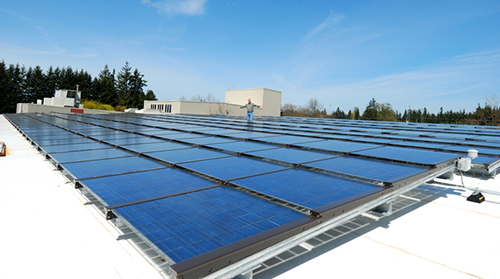 The state’s first full size, 75-kW community solar project has been completed on Poulsbo Middle School. Coming on line last March, the project was installed at no cost to the school. Instead, a group of community members financed the installation and are now eligible for up to $5,000 a year in incentive payments. 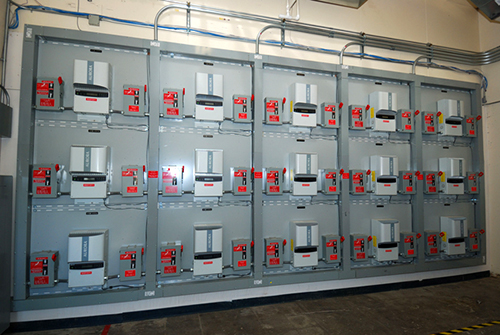 The community solar legislation, passed in 2010, allows the maximum incentive only on solar arrays whose components are manufactured in state. The middle school’s project is made up of 15 inverters and 120 modules, all manufactured by Silicon Energy of Marysville.

The middle school’s gym was an ideal site, with an unobstructed southern exposure. To keep the flat roof leak-proof, a galvanized steel racking system was fastened to built-in sloped curbs, which keeps the penetrations above standing water. The curbs are at 6 degrees of slope at an 180 azimuth, which will prevent shading between strings. The inverters fit perfectly in an equipment room directly beneath the array.

The project was developed by Washington Solar Incentives (WSI) and installed by Frederickson Electric. Rick Lander, owner of WSI, said the process took a full year. According to Lander, the number one hurdle was an SEC prohibition against any “general solicitation” explaining the potential of returns to interested investors.

“It’s a shame that regulatory forces work against community solar because it’s an energy model that invites community members to be part of the solution while boosting our state’s green economy,” said Lander.

Another problem was educating host facilities that they are only entering a lease arrangement, not a contract for work. Lander noted that cities and counties in particular believe they must go through a slow and costly RFQ process to benefit from a free solar array.

“While they are trying to sort things out, the incentive clock is ticking, lowering returns and eliminating potential investors,” Lander says. He concluded that even with its bold legislation, Washington has only five CSPs. “That number should be tenfold,” said Lander.

The project has been a success on many levels. The first six months online, the array generated over 61,000 kWh and is on track to earn the maximum incentive payment for its investors. The PMS students are proud that their school can "walk the talk" when it comes to renewable energy, while the teachers are developing coursework for interested students. You can view the array's output by going to http://siteapp.fatspaniel.net/siteapp/simpleView.jsf?eid=690011

Lander Contractors and Frederickson Electric of Port Townsend did the installation.