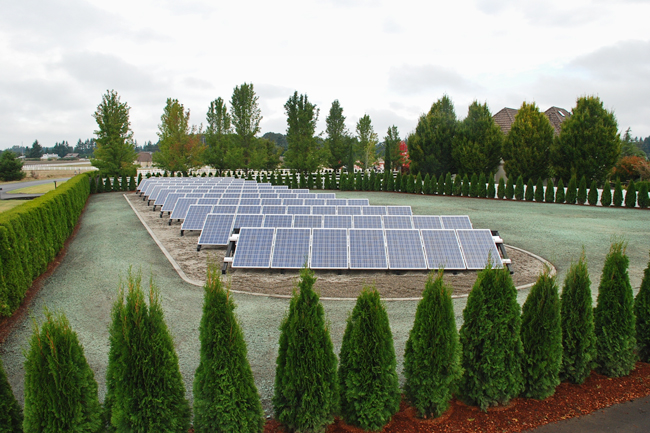 Stone Hedge, a 5,500 square foot home is currently connected to the largest residential grid tied Solar array in Thurston County. Once the contract was signed on August 8th, it was a scramble for workers from Sunset Air Inc. in Lacey to get the 23 KW project completed in time for the 2011 South Sound Solar tour on October 1st.

Located in the Canterwood development just outside of Olympia, the Hickey residence now boasts (96) 240 watt ground mounted Solar World solar panels combined with six Silicon Energy SiE 4.2 Aurora Power One inverter assemblies. State incentives for this combination will be calculated at $.18/Kwh for all energy generated by this system.

A unique feature of this installation is the new geothermal loop for two heat pumps serving heating and cooling for the residence, designed and installed six feet beneath the array. Owners Roger and Linda Hickey took into consideration increasing electricity costs and tax breaks when they planned the Stone Hedge Renewable Energy project. Net meter savings combined with Federal and State incentives will allow the PV installation to recover Hickey’s investment in about 7 to 8 years.

“Residential and Commercial Solar has become a growing part of Sunset Air’s business model” said Renewable Energy Division Manager Randy Norris. “Our company installed our first solar thermal project back in 1981. Since then with all the incentives, there has been a considerable shift of interest from Solar Thermal to Photovoltaic Solar. So far this year our Renewable Energy/Electrical Division has installed just over 90,000 watts and installations are scheduled to exceed the 100,000 watt threshold before the year ends. ”

Roger Hickey said he began planning this project about six months prior to installation, seeing it as a way to combat climate change and cut down the cost of heating and lighting their larger home. He also noted that when the time comes to sell their home, its energy independence should attract prospective buyers. “By doing this, I hope more people will do it” he said.

Stone Hedge has created a lot of interest in the community. Since it's completion Roger and Linda’s neighbors, and others who had the opportunity to visit their home during the South Sound Solar Tour have requested quotes for their own PV array.

For more information about this project contact Sunset Air Inc.