After returning from an extended stay in Denmark, Dan & Rebecca Miller decided it was time to do their part in moving toward a sustainable lifestyle. They stepped up their conservation efforts across the board, and even retired one of their vehicles in exchange for regular bicycle and public transportation use. Only after marinating on the idea of solar for almost a year did the Miller’s finally commit to using solar energy as their home’s primary power source. 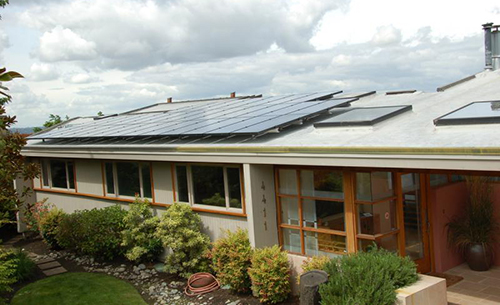 We gave the Miller family several module options to choose from in terms of efficiency, cost, and aesthetics. In the end, they decided to go with the all-black SunPower 225's because of their high effiiency (18.1%) and their stunning good looks. Aesthetics were especially important since the system will be visible from the street within their well-maintained and HOA-governed neighborood. Additionally, the homeowners understand the iportance of visually appealing systems in order for others to adopt the idea of solar and hope to see their neighbors eventually install PV systems of their own after driving by theirs on a regular basis.

We encountered two primary design challenges before the installation, both of which were related to the low slope of the roof. The first was whether or not to tilt the modules in order to maximize energy harvest. We performed a series of analyses to help us reach a decision and, based on comparative production estimates, learned that the added costs in labor and materials was not made up for in the small amount of added production. We also felt that the curb appeal of the system would be compromised if it were tilted and did not want to install an "ugly system" for them.

The other design challenge for us was to ensure that the roof would not leak. Unlike traditional shingle roofs for which there are specialized solar flashings and whose slopes help shed water, membranous roofs are prone to pooling and require custom patchings and/or flashings to keep water out. In an ideal scenario, non-penetrating, ballasted systems could be used, but these add cost and reduce design flexibility. Our solution was to bring the original roofer back out and have him roof over our sealed mounts, giving us two layers of leak protection. This extra precaution gave us and the homeowner confidence that no matter how much it rained, water would always remain outside the building envelope. And to safeguard even further, we used a heavy duty rail that allowed for longer spans between anchor points, resulting in fewer penetration points and therefore a lower likelihood of leaking.

Quality craftsmanship was a major factor in the customer's selection of a solar contractor, and they can rest easy knowing that they received the highest quality installation from A&R Solar. Additionally, they are able to track both the production of the solar pv system and the energy consumption of their home using SunPower's proprietary monitoring system.