3400 Capitol Boulevard still looks like any other office building in Tumwater when viewed from the street. However it’s 48 panel solar array makes it unique to every office building around. Owned by Renee Ries, whose business Fairchild Record Search is the main tenant, this building has undergone quite the journey.

Starting with an Energy Audit by Thurston Energy, all the way to applying for financing from the USDA’s REAP program, the collaboration of many local organizations is what made it all possible.

After the building received an upgrade of over 100 lighting fixtures, South Sound Solar was asked for a proposal to install a solar array. Renee wanted to maximize the production incentive, something that would require the 54 cents per kWh of Made in Washington panels. It also required a racked system, as the building’s roof was flat. After consulting with an engineer about how the building would handle the mounting, the system design was finalized to meet the owner’s budget, energy goals, and investment criteria. 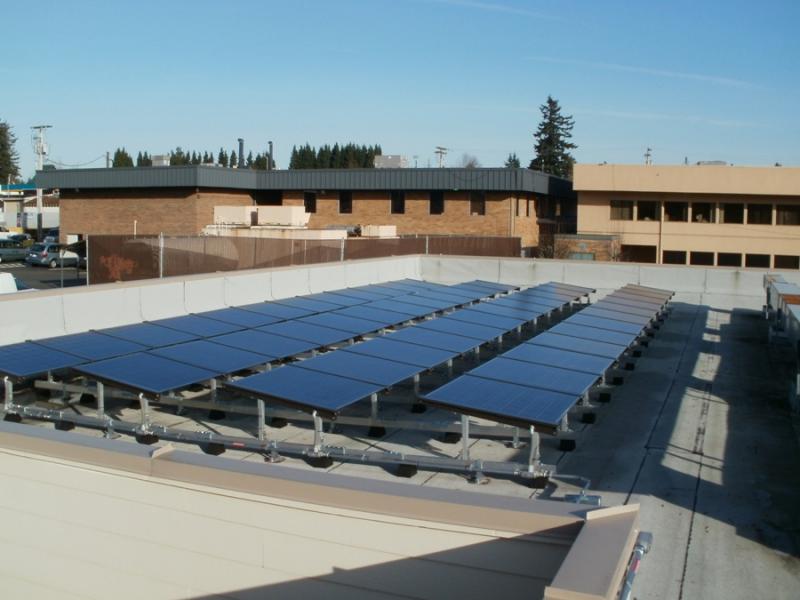 The 9.4 kW solar photovoltaic (PV) system was the first commercial solar installation in the City of Tumwater. The project, which took months of planning and preparation, was installed in just two weeks. It will produce about 10% of the energy used by the building. The array features 48 solar panels and two 4.2 kW inverters, manufactured by Silicon Energy, in Washington State. The system qualifies for the maximum available incentives in Washington State. Comparing January 2011 to January 2012 (before and after), the buildings energy consumption has already gone down by 30%.

Financing for this project was made possible through Thurston Energy, a nonprofit offering homeowners and businesses energy audits. Through their program, Renee was able to get a low interest loan through Obee Credit Union. She is now also applying for a REAP grant to help bring her costs down even further. She expects to receive her investment on the lighting back in less than 2 years, and the solar array to pay her back in about 5 years.