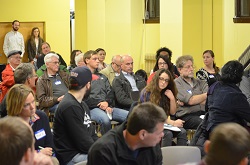 The January 2016 Solar Washington General Meeting took place January 13 at the Phinney Center in Seattle and featured representatives from utilities and manufacturing who recapped their business activities in 2015 and provided a glimpse of what to expect this year. Also discussed were the current bills being considered in Olympia.

We have made the presentations available below as a reference for industry personnel, homeowners and all others with an interest in solar. A link to the recording of the entire meeting is also available. We thank those who presented and attended the meeting.

During the meeting Solar Washington welcomed Britton Rife, Joan Schrammeck and Eugene Wilkie as new members of the board of directors. David Nicol, Bob Ransom and Dean Van Vleet return for another two year term. We would like to thank departing members Josh Miller, Linda Irvine and Wendy Wenrick for their time and service to Solar Washington. Thanks to those members who voted in the election. We appreciate your participation!

View and listen to the meeting on the Solar WA YouTube channel.