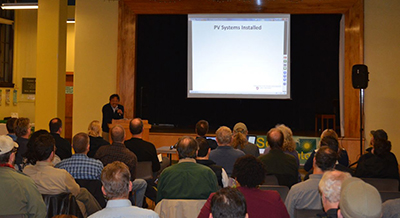 Solar Washington presents its General Meetings and Networking Events as an informative forum for industry personnel, homeowners and solar enthusiasts. Our meetings present an excellent opportunity to network with industry representatives as well as learn about current products, services and issues surrounding the solar industry in Washington State. Open to all solar enthusiasts though donations of $5 or other amounts from non-Solar Washington members and sponsors are welcome to offset the costs of holding the meeting.

Thanks to Solar Washington's sponsors and members for making our General Meetings possible. If you or your company are not a member or sponsor of Solar Washington, become one today. If you wish to share your comments about our meetings or have an idea for a presentation, please email info@solarwa.org.

Solar Washington skipped a September 2016 General Meeting in preparation for the 2016 Washington State Solar Summit which took place in October. We are working on uploading archives from 2015 and previous years over the next weeks and months. Check back soon for further updates.

Listen to a portion of past Solar Washington General Meetings on our YouTube page.