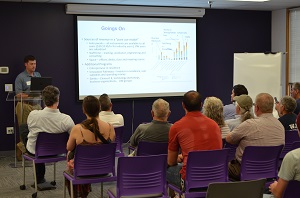 Over 50 guests joined Solar Washington and representatives from the Washington Clean Energy Testbeds for an evening of networking and a tour of the facility which is a location for catalyzing innovations in clean technology.

The Testbeds team discussed how this open-access facility for businesses and academic researchers is accelerating the development, scale-up, and adoption of new technologies in solar harvesting, energy storage, and grid integration. Guests were shown state-of-the-art instruments for manufacturing prototypes, testing devices, and integrating systems as well as met UW researchers and students.

Above: Michael Pomfret, Managing Director of the WA Clean Energy Testbeds, giving a pre-tour presentation about the facility.

About the Clean Energy Institute
The Clean Energy Institute (CEI) at the University of Washington was founded in 2013 with funds from the state of Washington. Its mission is to accelerate the adoption of a scalable clean energy future that will improve the health and economy of our state, nation, and world. To accomplish this mission, CEI supports the advancement of next-generation solar energy and battery materials and devices, as well as their integration with systems and the grid. The institute creates the ideas and educates the people needed to generate these innovations, while facilitating the pathways to bring them to market.

CEI launched the Washington Clean Energy Testbeds in early 2017. Click for more information about the Testbeds. 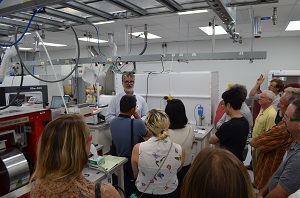 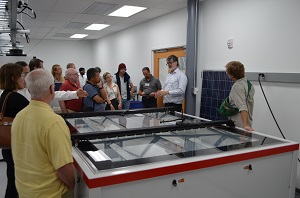 Devin MacKenzie, Technical Director of the WA Clean Energy Testbeds, giving a tour of the facility.