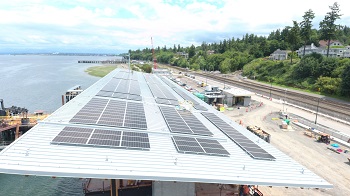 The new Mukilteo ferry terminal opened in December with Native-inspired design and art--and a roof filled with solar panels installed by A&R Solar.

The state-of-the-art facility anchors the second busiest ferry route in the state. Washington State Ferries solicited input from several groups, including local tribes. Residents asked that the terminal be green, Washington State required that the building be LEED-certified, and local tribes wanted it to be “light on the earth.” 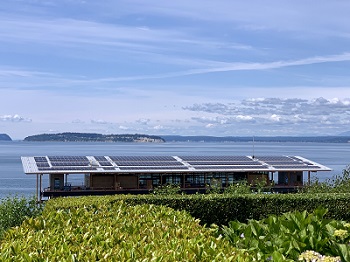 The building was constructed to resemble a longhouse, which serves as a gathering place for tribal communities. The roof hosts 408 SilFab 380 modules, totalling 155 kWs.

It is the first new ferry terminal to open in the state in 40 years. The project ties to the ferry system’s plans to electrify its system with plug-in hybrid-electric vessels. It is the largest single consumer of diesel fuel in the state government.

Washington State Ferries is the largest ferry system in the U.S., carrying nearly 25 million people each year on 10 routes (pre-Covid).