Solar Washington President David Nicol recently gave a TED X talk on the campus of WWU in Bellingham to talk about his experience working on solar microgrid projects in Alaska. Nicol describes the high financial and environmental cost of powering Alaska's cities and villages including the prevalence of diesel fuel to do so. The development of microgrids in Alaska and worldwide through the use of renewables including solar can bring electricity to billions more currently without access to clean and reliable power. Click on the image below to view his presentation. 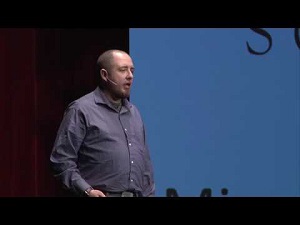 A forum addressing climate change, energy conservation and related topics was hosted by the WSU Tri-Cities Environmental Club earlier this week. Eugene Wilkie, owner of Now! Solar and a Solar Washington Board Member spoke with residents concerning how to go solar and conserve energy use.

Two-thirds of solar installation firms report that "difficulty finding qualified applicants" is increasing costs and impacting their ability to expand, according to a new research report released this week by the Solar Training Network, a program led by The Solar Foundation. 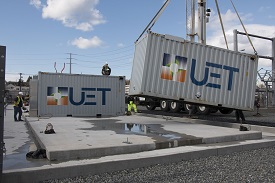 Snohomish County PUD dedicated its second energy storage system in March 2017, recently installed at a substation in Everett, Wash. The system is the world’s largest containerized vanadium flow battery system by capacity. The batteries and control systems are housed in 20 shipping containers, each 20 feet in length, packed with tanks of a liquid electrolyte solution.

The Solar Express program, operated by Snohomish County PUD, is sunsetting. Projects must be submitted by June 30, 2017 in order to be considered for a cash incentive. Through SnoPUD's Solar Express Program the PUD offers cash incentives for qualifying solar customers. Solar Express incentives are $300 per kW (up to $2,000 per residential system and $8,000 per commercial system). 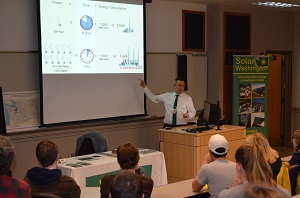 Solar Washington Board Member (and CEO of Pure Solar) Rich Phillips (pictured left) and SW Executive Director Patrick Nugent gave a presentation on solar on Friday, March 24 on the campus of the University of Washington in Seattle in front of 30 Puget Sound area students at the YMCA's annual Environmental Symposium presented by YMCA's Earth Service Corps. Click to learn more about the Earth Services Corps.

Solar Washington's presentation covered the various uses of solar (including solar PV and passive), how solar works, why solar is important from environmental and economic perspectives, as well as career opportunities in solar. Students asked a range of questions and were presented with hands-on items including solar PV wafers that are incorporated into panels, a solar PV panel itself, and more 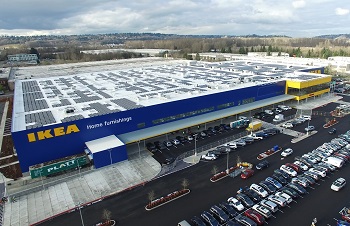 Renton, WA-Home furnishings retailer IKEA recently completed an installation of solar panels atop the relocated Seattle-area store that opened in early Spring 2017. The project is the largest solar rooftop array in the state of Washington.

The store’s 244,000-square-foot solar array consists of a 1.13 MW system, built with 3,268 panels that will produce approximately 1,261,000 kWh of electricity annually for the store, the equivalent of reducing 886 tons of carbon dioxide (CO2) – equal to the emissions of 187 cars or providing electricity for 131 homes yearly (calculating clean energy equivalents at www.epa.gov/energy/greenhouse-gas-equivalencies-calculator).

REC Solar, based in the Bay Area, designed the store’s solar array, which was installed by Seattle-based A&R Solar. Deacon Corp. managed the construction of the store, that reflects the unique architectural design for which IKEA stores are known worldwide.